What would a visit to Oslo be without Norwegian comedy brother-duo Ylvis? 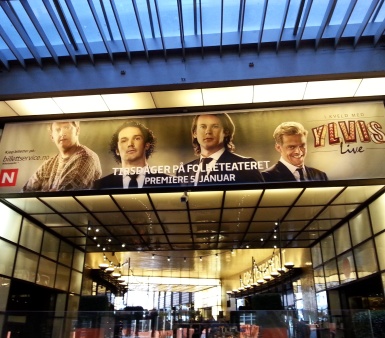 Magnus, Vegard, Bård and Calle greeted us on a daily basis from posters as we passed the Folketeateret on our wanderings. The actual entrance to the theater is inside a lovely, spacious passage housing several restaurants, and the smell of delicious food would be one of the first things we’d register when we would pass through. It all became very familiar and people-watching by this pretty fountain, or just relaxing briefly with a snack wasn’t frowned upon. 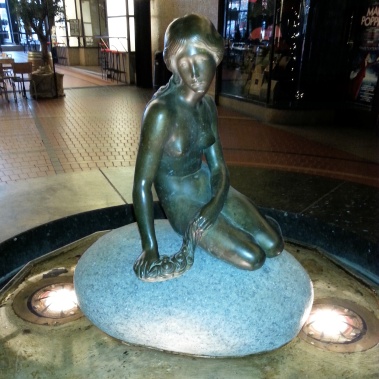 We had tickets to a live taping of the talkshow I kveld med YLVIS (Tonight with Ylvis), and the evening was particularly exciting as this was the last episode. We had a bite in the Burger Bar, with sweet potato fries and a delicious blue cheese dip for me – good preparation for the laughter and subsequent activities that followed the show. In an hour the faces of diners around us became familiar as well and I recognized many not only later in the theater, but even the next morning in the hotel. Many of them were (covertly) looking around, like us, possibly hoping to catch a glimpse of the Ylvis brothers, who are known popping up in various places around Oslo, the theater passage included.

Once the theater doors opened we poured in with the rest of the excited crowd – the building was beautiful inside. A long, layered glittering chandelier descended from the ceiling above a wide staircase, and the above hall with the bar was a harmonious mix of dark wood, plush seats and dim lighting. Once again that feeling of space – how do they do that everywhere? Every staff member, bartenders included, were wearing I kveld med YLVIS t-shirts. We settled by the bar with our drinks, chattering, when the bartender approached me and spoke in Norwegian. “I’m sorry?” I said politely. “I need to take your water glass, because they are going to use it in the studio,” she said, then, seeing the mingled surprise and excitement on my face, added the somewhat cryptic bit, “I’m not going to wash it.” I handed over my (still full) glass, she gave me a plastic one same as the rest of the population, and gave the original to a young guy also wearing an I kveld med YLVIS shirt.

We debated whether traces of my lipgloss would be visible on the glass, thus providing an exciting possible connection with the evening’s celebrities, but from where we were sitting it was impossible to tell. I do hope the glass did get washed, though.

A live band played on two balconies across from each other, and the guy signalling to us how to clap was doing a very good job, but the audience really didn’t need much encouragement. Finally, the lights dimmed, and the Ylvis brothers ran out on to the stage. After lots of YouTube videos, it was fantastic to see them in the flesh.

Before they even began interacting properly with the audience, which is a standard starting point of the show, a woman sitting a few rows away from the stage jumped up and began shouting something shrilly. She was quite short and I couldn’t make out what she was saying. However, Vegard and Bård leaned forward slightly, with concentrating looks on their faces, and after several attempts to understand her, it became clear what she was so desperate to get across: “I’M FROM THE UNITED STATES!” “Mah Gawd!” Bård responded immediately, getting the audience to clap with him. Another guy piped up with the same information and promptly got chastised by Bård: “You missed by 20 minutes!” After some more questions and politely acceping gifts being handed on the stage, Bård firmly declared this part of the show was over and it was all Norwegian now. Kudos, a brilliant and sharp bit of improv.

Despite not speaking Norwegian, the show was fast, snappy, fun and easy to follow, especially since Magnus, Vegard, Bård and Calle were all familiar to me, and my friend was a walking Ylvis encyclopedia. Any question you asked her about Ylvis, she had the answer. And thanks to loyal Ylvis fans, videos of the show and other stuff they do in Norwegian get translated in to English quickly. It was particularly interesting to see how a talk show was filmed, even more so when we watched the whole thing again on TV the following night, and spotted ourselves in the audience.

The show concluded with Calle, Vegard and Bård doing equally fantastic imitations of the lead singer of Norwegian dansband Ole Ivars, who was present to judge. They really couldn’t have gone out better (and the bus with Ole Ivars emblazoned on it finally became clear to me, as well as Bård’s cryptic Instagram post from earlier, but not being local, I’m allowed).

But the night wasn’t over yet. After some hanging around in the passage outside, watching the numbers of those waiting dwindle, the mother of one of the girls ran outside to check some apparent commotion. The daughter held her phone at the ready and I could feel all eyes focusing on her like a traffic light. Suddenly she got up, as did several others, and then we were all hurrying outside to square at the other end…where Magnus and Calle were taking pictures with excited fans (standing in line). “Thank you for coming,” Calle said in response to my thanks for a wonderful evening, as did Magnus, and they both took time to chat with us, despite the late hour, and it was all simply lovely.

After more waiting (those burgers were good!) we heard several girls gasp, “Bård!” and he appeared, but after one female fan shoved her selfie stick at his face with the force of Arnold Schwarzenegger on a good day, he gave a slight shake of the head and made a “Nuh-uh, dude” face, disappearing in to the bar next door. Laughing, we left, having definitely put “the right amount of pressure” on this very cool evening.